Why are we doing this?

There are several factors influencing Council’s decision to take a leadership role in this area. The new lights will:

What does the terminology mean?

Mercury vapour is the most inefficient option, and are the lights that are being replaced as part of Light Years Ahead Phase 2.

Council has chosen LED technology as it is the most energy efficient option (using up to 82 percent less energy than mercury vapour lights) and gives a brighter, crisper white light.

What is being changed?

It is only the luminaire or the ’head’ of the light that will be replaced during this project. The street light poles are not being replaced.

How many lights will be changed?

City of Parramatta will be replacing 5,970 street lights across the local government area (LGA).

Who is participating in the project?

City of Parramatta is the first Council to initiate Phase 2 of Light Years Ahead in partnership with Western Sydney Regional Organisation of Councils, who operates the program at a regional level. Other councils across NSW are likely to join at a later date.

When does the project start?

City of Parramatta started work in the community on 1 November 2017. At this stage it is scheduled to end in April 2019.

Where will the lights be replaced?

Lights are being replaced in residential areas only, i.e. no replacements in main roads, parks and recreation spaces, sports fields, industrial areas or shopping areas.

The suburbs that will be upgraded between November 2017 and March 2018 are Carlingford, Dundas, Dundas Valley, Eastwood, Epping, Ermington, North Rocks, Rydalmere, and Telopea.

The map below shows the locations of lights that have and will be replaced throughout the LGA. 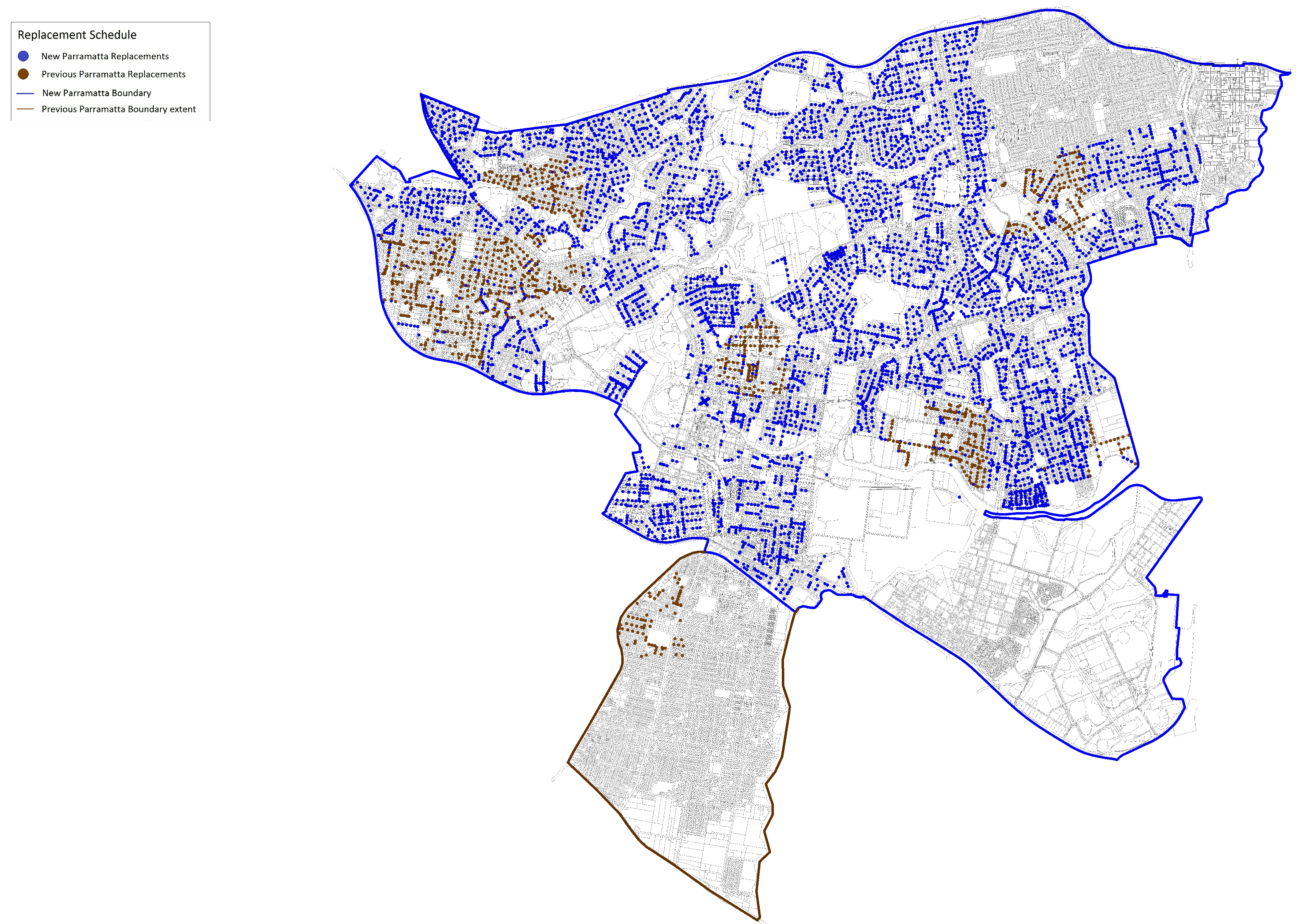 What will happen to the old lights?

The majority of components from the mercury vapour lights can and will be recycled.

Additionally, Council has found a vendor who is able to recycle the plastic visors and backings on the luminaire for Phase 2. These components are considered problem plastic for recycling and, because of Council’s commitment to finding a recycling option, around seven tonnes of plastic visor waste will avoid landfill.

What can the recycled parts be made into?

Street light components may be reused in a range of ways, including:

Will the new lights cause glare?

No. The new lights have been tested rigorously and have met the Australian Standard in street lighting – AS/NZS 1158: Lighting for Roads and Public Spaces. While the new lights may appear crisper than the old lights, the difference is very slight and colour temperatures of modern lights are much improved compared to the technology five years ago.