What are heat maps?

It is important to note that thermal maps may use different colour scales, so be careful to check the legend!

We know that hard surfaces in urban areas, such as roads, roofs and paths, absorb heat from the sun during the day, and then release this stored heat at night. Heat maps give us a clear picture of where there is excess heat being absorbed and released.

Heat maps also allow you to see how features in the natural environment influence local temperatures. 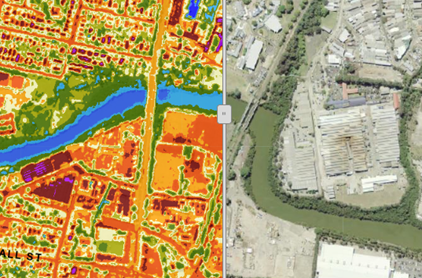 The City of Parramatta heat maps allow you to search for a specific address (prior to Council amalgamation) and see the surface temperature of the built and natural environment features at the location, for both the day and night.

How do I use heat maps?

Take a few minutes to watch this clip that explains how to use the City of Parramatta heat maps.

Go to the City of Parramatta heat maps

How is the City of Parramatta using these heat maps?

The heat maps play a role in how we plan a range of projects, including:

How were the heat maps created?

During the summer of 2012/13, the City of Parramatta captured thermal images of the Council area. Since this time, the Council area has changed through the amalgamation process in 2016. As a result, not all areas within the current City are shown in these thermal maps.

These thermal images were captured by flying over the City at between 6000 and 10 000 feet with multispectral and thermal cameras. This gives the maps an average view to 1 metre.

The heat maps allow you to search for a specific address and see the surface temperature of the built and natural environment features at the location, for both the day and night.

The average temperatures in the City on the date of the capture were 35.8°C during the day and 22.6°C at night.

Sydney Symphony Under the Stars

Conductor Benjamin Northey takes up the baton once more for a program ranging from the classics of the 18th and 19th centuries to the great film scores of the 20th century.