The significance of the Parramatta CBD has been recognised in the State Government’s strategic planning framework for a number of decades. Its current recognition at the heart of the ‘Central City’ in the Greater Sydney Region Plan - A Metropolis of three cities and the Central City District Plan continue to strengthen the significant economic function of the Parramatta CBD and its role in providing necessary housing, employment, recreation and cultural opportunities.

To manage the significant growth and changes in the CBD as envisaged in the Greater Sydney Region Plan – A Metropolis of Three Cities and the Central City District Plan, Council is undertaking a major review of its planning framework that will comprehensively address the land use and infrastructure needs for the City Centre into the future.

This planning framework is made up of the following components, as shown in the diagram below. 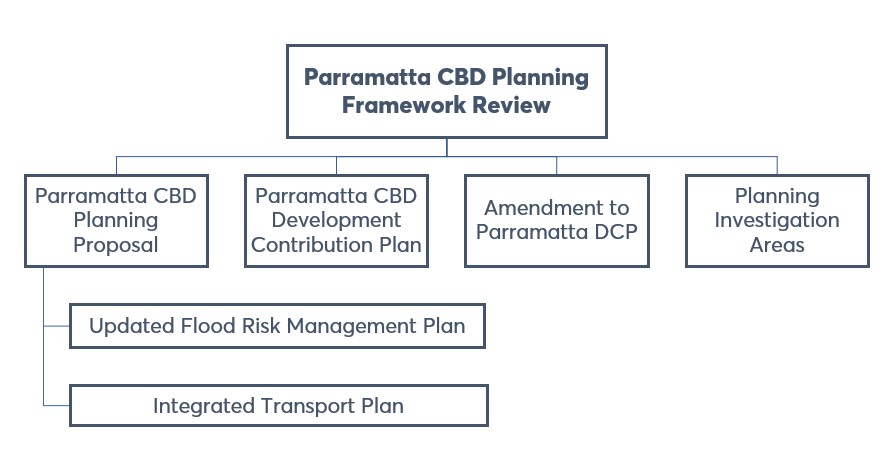 Council’s progress in preparing these various components to the review are at various stages. The review is considering a number of complex matters in planning for the growth of the CBD, including urban design, transport, flood risk, heritage, economic and infrastructure funding matters.

Consistent with the Parramatta CBD Planning Strategy, which was endorsed by Council on 27 April 2015, and also amendments as endorsed by Council on 25 November 2019, Council will investigate the ‘Planning Investigation Areas’ (PIAs) shown in this map for amended planning controls to be progressed through separate planning strategy/Planning Proposal amendment processes, as follows:

▪ Southern PIA (which includes the area referred to as the ‘West Auto Alley Precinct’).

On 15 June 2021, Council resolved to approve the Parramatta CBD Planning Proposal with some minor changes and forward it to the Department of Planning, Industry and Environment (DPIE) for its finalisation.

Exhibition of the Draft Parramatta City Centre DCP and supporting information will be undertaken from Monday, 15 November until 5pm, Monday, 13 December 2021. Head to https://participate.cityofparramatta.nsw.gov.au/cbd-DCP for further details including accessing the exhibition materials and how to lodge a submission on the Draft DCP.

The final Update of the Parramatta Floodplain Risk Management Plans, together with its supporting documents, being the Parramatta CBD Flood Evacuation Assessment and the Horizontal Evacuation Pilot Study can be accessed below.

If you would like to discuss any part of the Parramatta CBD Planning Framework Review or need further information, get in touch with our Land Use Planning team on 02 9806 5050.

SOUND WEST Music + Tech Festival is coming to Parramatta March 30 - Apr 3 2022, bringing together the biggest brands in music and tech from around the globe. Over 5 huge days of live music and a 2 day