A number of planning controls apply to Wentworth Point:

The relevant controls applying to Wentworth Point are illustrated below, and more detail can be found at Council’s Planning webpages. 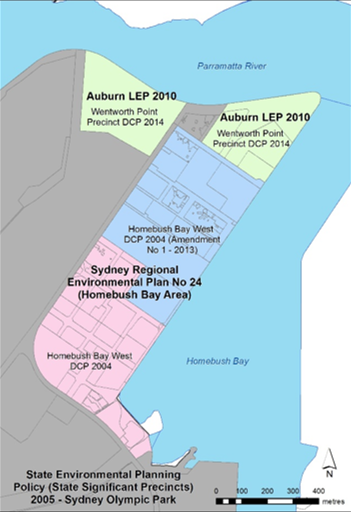 A number of infrastructure projects are completed, underway, or planned for Wentworth Point including:

Access into and out of Wentworth Point remains a key planning challenge, as private vehicle access is limited to one road in and out of the precinct (Hill Road).

In June 2014, the NSW Government, (former) UrbanGrowth NSW and the former Auburn Council signed a Precinct Support Scheme agreement allocating $5 million to design and construct a new park at the tip of the Wentworth Point peninsula. Delivery of the park is the responsibility of Landcom (formerly UrbanGrowth NSW) on behalf of RMS, who own the land.

Landcom is currently working with Council to progress delivery of the park, and construction is anticipated to begin in mid-2018. 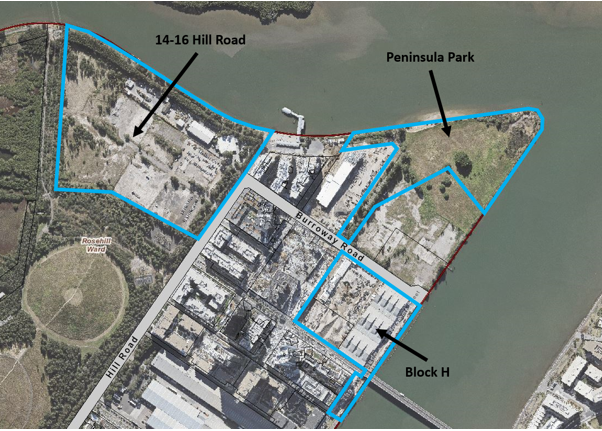 Council is currently considering a number of planning matters at Wentworth Point.

Key matters are identified below.

The site at 16 Burroway Road and part 5 Footbridge Boulevard, commonly referred to as ‘Block H’ is one of the remaining undeveloped parcels in the precinct. The planning controls for Block H are set through the Homebush Bay West Development Control Plan (DCP) 2004 Amendment No.1 and the Sydney Regional Environmental Plan No. 24 – Homebush Bay Area (SREP24).

The draft amendment to the Homebush Bay West DCP (Amendment No. 2) and accompanying draft Planning Agreement were publicly exhibited between 19 October 2020 and 16 November 2020. Council officers are currently reviewing the submissions received. You can continue to view the exhibition material on the Participate Parramatta site using the link below, however submissions and the survey have closed.

Following review of all submissions, a report will be prepared for Council’s consideration detailing the outcomes of the exhibition, including issues raised in submissions and Council officer recommendations. It is anticipated that this report will be considered at a Council meeting in early 2021. Further details on the reporting date will be provided when known. Should you have any questions regarding this project, please email blockh@cityofparramatta.nsw.gov.au

As a result of the Local Government amalgamation in May 2016, this site became part of the City of Parramatta Council.

A planning proposal was lodged with Council in December 2017 seeking to amend the planning controls to reflect a new layout for the site, including additional height (up to 40 storeys) and open space (but no additional density). Some additional changes are also proposed to allow for commercial premises and cafes on the site.

The planning proposal is accompanied by a draft amendment to the Wentworth Point DCP 2014, which reflects a new proposed masterplan layout, and draft planning agreement for the embellishment of the new foreshore park and road improvement works to the intersection at Hill Road/ Burroway Road.

A report on the draft planning proposal was considered by the Local Planning Panel (LPP) on 16 July 2019 and by Council at its meeting of 26 August 2019, where it was endorsed to forward the planning proposal to the Department of Planning, Industry and Environment (DPIE) for Gateway determination.

The LPP and Council reports and associated attachments can be viewed though the links below. A Gateway determination was issued by the DPIE on 31 March 2020 enabling the planning proposal to proceed to public exhibition subject to a number of conditions being addressed.

A report on these matters will be prepared for and considered by Council in due course.

If you have any questions about the progress of these projects, you can contact our Land Use Planning team on 02 9806 5050.