Over nine (9) weeks, a geotextile marker and capping layer using clean soil will be constructed. The protective cap will raise the height of the reserve by approximately 30cm, with footpaths constructed at the new level.

As this is a historically sensitive site, consent for these works was granted by the Heritage Council of NSW.

A Heritage Consultant has been appointed to ensure the protection of heritage items at the site. The sandstone staircase and all existing trees will be retained.

A safe work site will be created with pedestrian detours in place.

Works will take place Monday to Friday 7am to 5pm and Saturday 8am to 5pm and are expected to take nine (9) weeks, finishing in November 2022, weather permitting.

Please see Frequently Asked Questions below or Download the PDF.

Investigations into the Parkes Street nature strip have confirmed that asbestos contamination, known to be present in soils beneath Experiment Farm, extends into the lands that form the nature strip. While the material does not pose a health risk if it remains undisturbed, damage to existing grass, which acts as a cover, could lead to the soil being exposed.

With approval from the NSW Heritage Council to carry out works at Experiment Farm, City of Parramatta has included the nature strip within the remediation program for this site. A new double-width pedestrian footpath will cap the soil as a permanent remediation measure.

Works in the nature strip will be divided into two stages. The  eastern area of the nature strip, between Clay Cliff Creek and the western boundary of Hambledon Cottage Reserve, will  undergo treatment first, with works scheduled to start  Monday 15 March.  Footpath detours will be in place throughout the works program. Work is expected to take approximately five (5) weeks to complete, weather permitting.

In accordance with NSW SafeWork requirements, asbestos air-quality monitoring will be carried out during all excavation works.  To ensure public health and environmental protection, workers will employ all appropriate safety precautions while on site. Workers will also be required to wear appropriate personal protective equipment.

It is expected that work to treat the western area of the nature strip will begin later this year. Planning for this work, as part of a program to remediate other areas of Experiment Farm Reserve, is now in its final stages.  More information will be provided on this page as details of the program are confirmed.

Appropriately qualified environmental consultants have been engaged to carry out soil investigation works in the nature strip of this area from May 18th.  The purpose of these works is to test the soil beneath the nature strip, and determine whether the soils are affected by asbestos or other contaminants.  These works will inform designs to improve the capping of contaminated soils that have been previously identified buried underneath the adjacent Experiment Farm parklands. 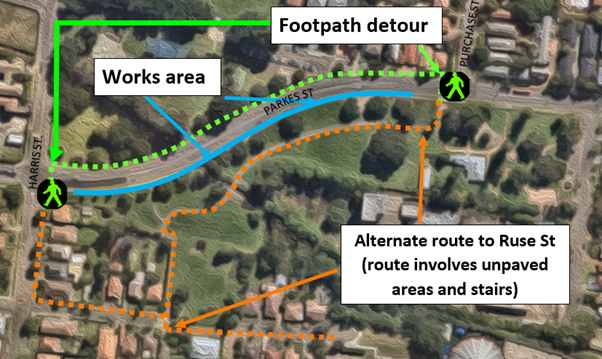 How will the works be carried out safely?

The works will involve the use of hand operated tools to dig boreholes in a number of locations, and take samples of the soil at various depths to be tested for contaminants.  In accordance with SafeWork requirements, appropriate personal protective equipment will be worn by workers during the testing, and air quality monitoring will be carried out throughout the works.  Barricades will be in place to ensure a safe distance between pedestrians the works area.

Will the footpath be accessible during the works?

How long will the works take?

The testing is expected to take up to 5 working days, weather permitting.  Each area will be reinstated and inspected before being reopened to public access.

Previous investigations at this site

Experiment Farm is one of a number of sites across NSW that have been identified by the NSW EPA as having potentially received waste from James Hardie Industries as fill material.

Aerial imagery and other records suggest that the fill material was placed in the area between the 1950’s and 1960’s.

While a permanent physical cap is designed and constructed, management works at this site have focussed on maintaining healthy grass coverage, mulching, and prohibiting excavation works that could breach the protective surface soils and expose the fill layer.  As the site is a State Heritage site, a heritage review has also been completed to ensure works are designed and carried out in a way that protects the archaeological and historical significance of the site.

Following completion of this review, Council has applied for, and been granted an exemption under section 60 of the Heritage Act 1977 by the Heritage Council of New South Wales to allow the works to be commissioned and carried out.  This exemption was granted in March 2020.