Your library at home

Bored staying home?  We have come up with a few ideas to keep you and your family entertained during this difficult time.

Also take a look at our What's On page to see our free online events you may be in interested in booking.

Check out the library's YouTube channel for a variety of videos created by library staff. There's craft videos, story time, workshops, readings from classic books, instructional videos on how to join the library and use library apps, and much more.

Library staff have been creative and have made these fun and easy videos for all the family to enjoy. 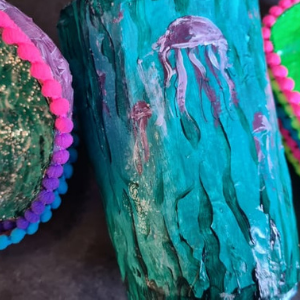 National Science Week is an annual celebration which highlights science and technology! Library staff have created some excellent educational videos to celebrate.

Learn how to paper mache, create a polymer bouncy ball, egg experiments, make a paper helicopter and much more.

Find out the  cool science behind these experiments.

Making  Playdough at home is lots of fun! This homemade non toxic playdough is soft, takes a short time to make using common ingredients you probably already have in the pantry. Kids will learn colours and have fun making shapes.

Why not use this stay at home time to learn something new? Our creative staff member Elizabeth is now going to show you how to recycle an old book into a beautiful book vase. She uses all household items for this craft. Are you ready? Watch now!

Meet our arty staff member Dienie from Epping Library. Wondering what kids can do for another week of school holiday in 'stay at home' situation? You’d be surprised there are so much you can do and so easy to keep your children entertained with no additional cost. Watch how Dienie creates an entire owl family, a butterfly, and more using household items. Be imaginative and creative!

Watch a demonstration from Dienie on how to use household items for weaving!

More fun videos from the Library:

Yan Ping's A to Z guide on birds!

Fun games for the family

Parents! Interested in quick, easy and fun games that incorporate creative and interactive learning opportunities for your children during lockdown?  Then look no further. These brightly coloured games with cute little characters created by our library staff are just the thing and are fun to play by all ages! Are you up to the challenge?

There is always something for adults in our libraries. You can connect with books, and discover what to read next

A Taste of Classics

Written in 1897 in the form of letters and diary entries, Bram Stoker’s Dracula is the story of the infamous Count Dracula. Take a listen as Preetha reads from this much-loved horror classic. Read the full novel. Watch the video.

One Thousand and One Nights

The first English language edition is more commonly known as Arabian Nights and is a collection of Middle and South Asian folk tales compiled in Arabic during the Islamic Golden Age. The tales themselves were generated by various authors. Nisa shares a passage from this well-known classic. Read the full collection. Watch the video.

In this reading, Katherine steps into the fictional town of Cranford which is inhabited by the central characters, Mary Smith and her friends. Read the full novel. Watch the video.

The Adventures of Sherlock Holmes by Arthur Conan Doyle

The famous detective captures not only literature lovers, but film and TV producers around the world, historically and in contemporary times.
Join Bruce as he reads a passage from The Adventures of Sherlock Holmes by Arthur Conan Doyle. Read the full novel. Watch the video.

Sense and Sensibility by Jane Austen

Jane Austen is a favourite classic author, whose works have been read and re-read by many over the past 200 years. Jane's stories are still popular today and have been adapted into movies and TV series. Read it aloud with Nisa. Watch the video. Borrow a copy.

Before she began the novel, Austen wrote, "I am going to take a heroine whom no one but myself will much like.". Austen's female characters are as much independent as they cold be at the time. Emma, however, overestimates her matchmaking ability and gets herself into too much of others business. Read aloud with Yan Ping. Watch the video.

With almost 7,500 titles from 155 countries in 66 languages and available via website or app, all you need is your library card to stay up-to-date with the latest happenings worldwide. A quick video introduction on how to use the PressReader app.

Borrow eBooks and eAudio online or with our library app.

Watch a film or documentary free with your library card.

Enjoy award-winning movies, documentaries and acclaimed foreign films without ads.  You can watch Beamafilm on all your favourite devices and stream unlimited content straight to your TV, computer, phone or tablet, all for free with your library card. Choose from over a thousand great films and find something new or rediscover a classic.

Listen to a podcast